You are here: Home / Blog / passata

One day I’ll blog about a recipe and not start by talking about my children and their eating habits. Not today though.

I’ve called them fussy before, but it’s not so much that they refuse to eat everything, it’s that they’re irrationally selective about what they eat. They’ll refuse something plain like a cheese sandwich, and then want scotch eggs or broccoli smoothie. Where the hell does a request for broccoli smoothie come from?!

What works one day won’t work the next, and I swear they’ve organised themselves as a tag team, where when one eats dinner the other refuses.

So whereas sometimes they’ll eat their veg, I often have to get creative, and in this case it’s with a veg packed passata. (Confession- Ella’s Kitchen are the creative ones here, this is from their cookbook). I can use it in recipes like this chicken cacciatore to add extra veg.

I use this as a guide, I had extra butternut squash this time and didn’t weigh the peas.

Cool the squash and carrot until soft then add baked beans and blend with a hand blender. 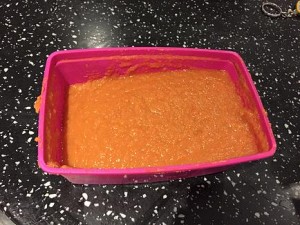 This is roughly 500ml, and I had 2 of these which I froze, and enough to use to make a ragu straight away.

It really didn’t take that long and produced a decent batch. The colour isn’t as appealing as a shop bought pasta sauce/ passata, so the ragu wasn’t as red as when I’ve made it before, but other than that it’s pretty good. If I were to have it on its own with pasta I think I’d need to add a bit of seasoning and herbs though.